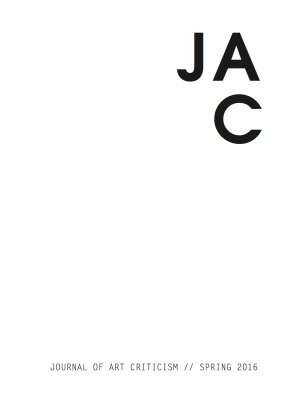 What place does a body have in a digitized world? How can technology serve as an extension, alteration, or substitution of the physical body? And how do our constructions of digital space, both personal and collective, differ from those of other spaces?

With these questions in mind, we launched JAC’s first call for submissions into cyberspace. Seeking to engage undergraduates in a countrywide dialogue on contemporary art, we framed the call with texts by several artists and critics: Raqs Media Collective’s Digressions from the Memory of a Minor Encounter, a discussion of the new possibilities of networks in time and space; Karen Archey’s Bodies in Space, a theorization of the Internet as a communal site for subcultures and repressed groups; and John Kelsey’s Next Level Spleen, a bleakly posthuman and post-communal probe into digital networks.

In the collection of essays and art that follows, students expand upon the these terms, opening new inquiries into the digital as a transformative site for the human form. Alec Mapes-Frances explores the implications of our world as a reflection of game-space through an analysis of machinima. Ella Coon tests the utopic notion that digital space can obscure identity by finding the limitations of videography in Sondra Perry’s two-channel installation. Taking up the troubled concept of disembodied online identities, Amelia Ames broadens the discussion to include sculptural works that intertwine physical and digital dependency. Anneliese Katherine Mesa-Jonassen analyzes how artificial constraints on Wolfgang Tillmans’s digital practice enhance the physicality of both photography and viewership. Finally, Elizabeth Keto delves into digital time in a reframing Rineke Dijkstra’s supposedly traditional portraiture. Anneliese Katherine Mesa-Jonassen, Ara Wanqing, Gabriella Moreno, and Frances Cocksedge deconstruct digital and physical space to form new hybrid artworks.

This journal could not have been published without the tremendous support of Joan Snitzer and the Barnard College Art History department. We extend many thanks as well to John Miller, Leslie Hewitt, Samuel Draxler, and Julia Wolkoff for their encouragement and guidance throughout this endeavor.

Questioning the Digital as Egalitarian: Sondra Perry’s Lineage for a Multiple-Monitor Workstation: Number One
Ella Coon

we have fleas!
Frances Cocksedge